Dioecy (Greek: διοικία "two households"; adjective form: dioecious) is a characteristic of a species, meaning that it has distinct male and female individual organisms.[1] Dioecious reproduction is biparental reproduction. Dioecy is one method that excludes self-fertilization and promotes allogamy (outcrossing), and thus tends to reduce the expression of recessive deleterious mutations present in a population.[2] Flowering plants have several other methods of excluding self-fertilization, called self-incompatibility. 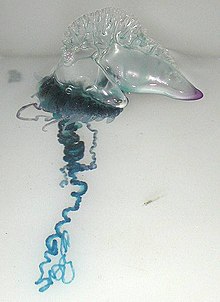 Physalia physalis, Portuguese man-of-war, is a marine colonial animal that is dioecious; the reproductive medusae within a colony such as this are all of the same sex.[3]

In zoology, dioecious species may be opposed to hermaphroditic species, meaning that an individual is of only one sex, in which case the synonym gonochory is more often used. Dioecy may also describe colonies within a species, such as the colonies of Siphonophorae (Portuguese man-of-war), which may be either dioecious or monoecious.[4]

Most animal species are dioecious (gonochoric).[5]

Monoecy and dioecy in flowering plants.

Dioecious species have the male and female reproductive structures on separate plants.[6][7] The meaning of male and female in the context of plants is different from that used in animal groups and the usage is not strictly correct. This issue is discussed below in the Alternation of generations section. About 6 percent of angiosperm species are entirely dioecious and about 7% of angiosperm genera contain some dioecious species.[8] Examples of dioecious plant species include ginkgos, willows, cannabis and African teak. More examples of dioecious plants can be found in the Wikipedia category, Dioecious plants.

Dioecy occurs in a wide variety of plant families. However it is more common in woody plants[9] and heterotrophic species.[10] Certain algae are dioecious.[11]

There are several alternatives to dioecy for sexual reproductive structure organization in plants including bisexual flowers, monoecy, gynomonoecy, andromonoecy. These are described at Plant reproductive morphology. 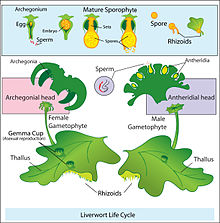 Liverwort species are either dioecious (dioicous) as shown here or monoecious (monoicous), with both antheridia and archegonia on the same gametophyte

Monoecy and dioecy in fungi refer to the donor and recipient roles in mating, where a nucleus is transferred from one haploid hypha to another, and the two nuclei then present in the same cell merge by karyogamy to form a zygote.[13] The definition avoids reference to male and female reproductive structures, which are rare in fungi.[13] An individual of a dioecious fungal species not only requires a partner for mating, but performs only one of the roles in nuclear transfer, as either the donor or the recipient. A monoecious fungal species can perform both roles, but may not be self-compatible.[13]

Dioecy has a demographic disadvantage compared with hermaphroditism: only about half of reproductive adults produce seeds. It is commonly assumed that dioecious species must therefore have fitness advantages to compensate for this cost through increased survival, growth, or reproduction. In trees, compensation is realized mainly through increased seed production by females. This in turn is facilitated by a lower contribution of reproduction to population growth, which results in no demonstrable net costs of having males in the population compared to being hermaphroditic.[14] Dioecy may also accelerate or retard lineage diversification in angiosperms. Dioecious lineages are more diversified in certain genera, but less in others. An analysis suggested that dioecy neither consistently places a strong brake on diversification, nor strongly drives it.[15]

This article is a direct transclusion of the Wikipedia article and therefore may not meet the same editing standards as CannabisQAwiki.